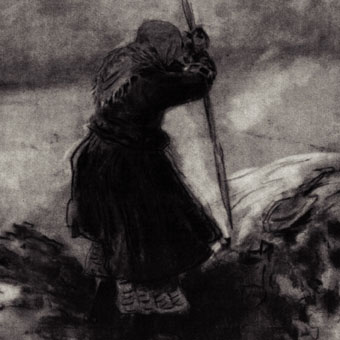 Deakon is a rather obscure black/death metal band who hails from Russia. "Du Bist Mir Alles" is a 3-track demo of sorts released through the ever-awesome Assault Records, and I must say that I like this output quite a lot. The sound is very raw and organic, and the music is somewhat stripped-down and basic, but there is an atmosphere to it that appeals to me and yet I find it difficult to pinpoint exactly what it is that I like about it. The band isn`t super tight nor do the members sound like pros at handling their instruments, but there`s a primitive and charming energy to Deakon that I like. The first song, "The Flood", is atmospheric while the second song, "Estetika Satana Kriminale" is more thrash-oriented. The closing track, which is entitled "Monache", is a varied and dynamic composition, and it`s probably the song on the disc along with "The Flood". There are undetones of doom metal present as well.

It all sounds as if it was recorded in their rehearsal space, and that may turn some people off, but to me it comes off as honest and in-your-face. The open-minded black metal fanatic should check this one out!