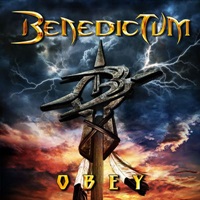 The fourth album from Phoenix, Arizona’s ‘traditional metal on steroids’ (an apt description courtesy of vocalist Veronica Freeman) Benedictum is another transitional affair in terms of a fresh rhythm section and new producer behind the boards. Jag Panzer drummer Rikard Stjernquist and Tynator bassist Aric Avina join with veteran guitarist Pete Wells and the aforementioned Veronica for the current quartet- and stepping in for the first time as producer John Herrera took a long range perspective at the band’s discography to give them an accurate balance between modern tones and technology with their classic, traditional template in terms of style and songwriting.

"Obey" as a result is a 12 track affair heavy on gang-like choruses, sturdy, hefty riffs with fierce impact, and the rhythm section fluctuates when called for between punishing double bass driven fare and then steady mid-tempo anthems that result in perfect call and response audience involvement. Veronica as a singer takes cues from a high octane, gritty velocity point of view- a female comrade to Rob Halford, Ronnie James Dio, and probably a sister companion to Leather Leone. Check out "Evil That We Do", the glass shattering work in the energetic opener "Fractured" or highway ready "Apex Nation" for three songs that exemplify her metal delivery.

The ballad "Cry" features a guest duet with ex-Black Sabbath vocalist Tony Martin, and I think this melodic number showcases both in a proper light along with adequate pacing musically from Pete’s acoustic/ electric choices and the off-time fill work from Rikard- and is one of the highlights on the record. Closing with the 7:14 epic "Retrograde" that has a marching, Dio meets Maiden atmosphere, I can foresee a large number of songs making the cut in a long term live capacity from this record.

Those that may have been a little put off with the modern bells and whistles/ production qualities of "Dominion", I think John steered the ship in the right course on "Obey". Benedictum are one of the best US metal bands that place the ‘power’ in all the appropriate places, delivering solid riffs, solos, and structures and if you grew up with the likes of Priest, Dio, Maiden, and Accept – you need a lot of this band’s discography in your life.