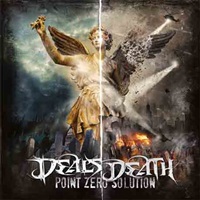 The third album from Sweden’s Deals Death is another exercise in melodic death metal, featuring a modest amount of keyboards for haunting effect as well as a vocalist in Olle Ekman that could be a lower register twin to Alexi Laiho of Children of Bodom. There is an interesting use of piano parts for "Facing the Echoes" that is almost trance/dance-like, as you get swept up by the aggressive guitar harmonies from Sebastian Myren and Erik Jacobson. I can also feel a lot of the power brigade getting behind Deals Death, they seem to prefer the type of transitions and main riffs that offer dual aggressive and harmonious contrasts.

Prepare for neck braces from the whipping action "Flatline" and "Paramount Activity" provide. When the band go a little more mid-tempo with their riff and rhythm choices in "Beyond Reason", you can definitely sense an affinity for current Soilwork or In Flames influences.  Deals Death is another of those bands that adequately get the job done, and yet aren’t really forging their own sound this long into their career (starting in 2008) – so if you can handle the fact that the reference points are obvious, "Point Zero Solution" provides modest melodic death metal entertainment for your money.

Gaining viral YouTube video claim for his death metal warm up exercise with a piano, Olle has a clarity while still producing multiple scream/growl inflections with his vocals- and I think this is something he should continually explore down the line for Deals Death. Having never heard the band before this album, I would say "Point Zero Solution" will gain most appreciation from the indiscriminate melodic death metal fan, and that those who want something a touch more progressive or original need to seek out other Scandinavian acts.

EAT THE GUN – Stripped to the Bone