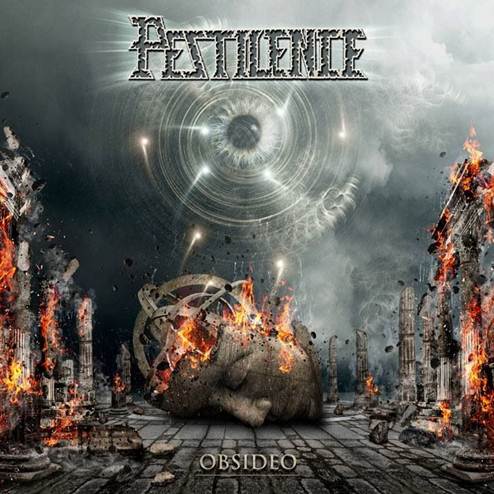 Pestilence being one of my favorite acts back in the days with excellent releases like "Consuming the Impulse" and "Testemony of the Ancients" (and to some degree "Spheres") really let me down with their comeback album "Resurrecton Macabre" in 2009 (no coment on 2011´s "Doctrine").

The punch and the brilliant song writing was gone and nothing seemed to click.

Mainman Mameli who took over the mic after Van Drunen left somewhere around 1992 have allways incorporated jazz and fusion influences in Pestilence´s death metal with varying degree of success.

"Obsideo" is somewhat back to old school from. Gone are all the strange arrangements and intricate/obscure riffs and back is the death metal vibe they had back in the early 90´s. Mameli´s vocal have allways been good and it still is today, no problems in repleacing Van Drunen gritty voice in my book (Van Drunen, who since have delivered big time in both Asphyx and Hail of Bullets).

The tempo is back in full force and it´s pleasing to hear the blast beats working with the melody and not against it for the overall better flow of the songs.

The atmosphere is also captured nicely on "Obsideo", combined with great production the feeling of listening to pure death metal really hits home.

10 tracks of (almost) old school Pestilence is what "Obsideo" is and take my word for it when I say this is the best Pestilence material in about 20 years.