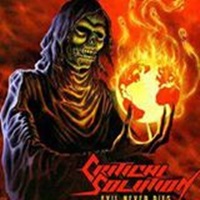 A 14 song concept album as a full length debut can be a feast or famine proposition. For Norway’s heavy/ thrash band Critical Solution, I feel like they may have bit off a little more than they could chew with a fictional tale of assassinating a king, losing your own life, than making a deal with the devil to live once again as a ‘soulmaker’ and spread evil and terror across the globe. Carrying out a story line front to back is best left to bands who establish a bit of a following and are willing to expand horizons – or masters like King Diamond.

Lead guitarist Christer Slettebo handles the main microphone duties, and his work on "Spor 3", "Dead Man Walkin’" and "Hell’s Warrior" could make him a serious contender for James Hetfield if he ever needs a voice double. Musically the band seem to favor a mid-tempo gallop, with elements of Metallica, Iron Maiden, and Saxon favorably thrown into the Critical Solution songwriting ethos. "God of Anarchy" starts with a slower, marching movement as Christer and fellow rhythm guitarist Tov Glesnes lay down a series of echo-oriented harmonies before the crunchy riff parade begins and drummer Egil Mydland goes off to the up tempo races for a measure or two and returns to a solid mid-tempo traditional pace. "Sad Hill" features gang vocals during the chorus, while I enjoyed the bluesy speed send up "Wallace Green" and follow up heads down thrash charger "This Burning Hate".

The album closes with 3 covers: "Speed King" from Deep Purple, "Killed by Death" from Motorhead, and "Seek and Destroy" from Metallica. Probably a showcase for their influences, and all adequately done- but not really transforming the band into something with an original slant on the genres they love.

So if you love Metallica in their mid-tempo format, "Evil Never Dies" will probably keep you smiling. For my tastes, this is not far removed from a tribute act.