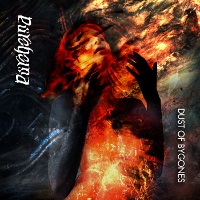 I must say it’s quite rare to hear an original metal band’s inception as a wedding band, but such is the case with this Finnish five-some back in 2007. The follow up to last year’s "The Entry Point" debut album, "Bygones" consists of 2 original songs, an edited version of one of those original songs, and another edit of one of the debut album offerings. In other words: a great little teaser taste of the group’s sound.

Psychema blend together atmospheric/dark chords with melodic and propulsive progressive passages- the vocals can often be airy and gothic one moment, then aggressive and almost extreme the next. Guitarist Tomi Kallava has one of those rough sheens to his vocal range, bringing to mind Ville from Poisonblack with a little Pink Floyd psychedelic element in for good contrast. Musically the guitar/ keyboard interplay reminds me of the softer side of Opeth and Dream Theater combined with the atmoal melody in the verses against an engaging musical soft to loud build up and the cultural guitar texture-hook that grabs you right away in opener "Dust of Bygones". What is enjoyable most about these 4 songs is the band’s ability to still be forward thinking and dynamic without being overtly intricate or over the top in terms of composition and execution.

At just under 19 minutes, "Bygones" serves as a great teaser for their second album. The Finnish scene proves once again their professional versatility and comes up smelling like a rose.