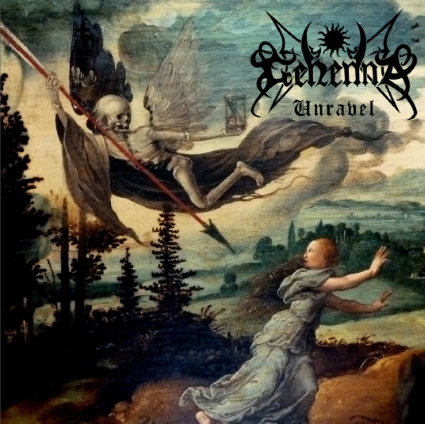 Finally! I`ve waited a long time for a new Gehenna album to see the light of day. It`s been 8 years since we were served "WW", which was an excellent album in my opinion. Nearly every Gehenna album has something interesting to it, so naturally I was pretty excited about this new album of theirs. So, how do Gehenna sound anno 2013? Well, let me tell you, it`s ugly and bleak at times. No, let me rephrase that; it`s damn ugly and intolerably bleak at times…to the point where you don`t really feel like listening to it again and yet you`re drawn to it for some weird reason.

"Unravel" contains 8 dark and brooding songs and nearly every one of them is unpleasant to listen to. Not that the music bears any resemblance to Mayhem, but "Unravel" gives me the creeps just like "Ordo ad Chao" does. Like I said earlier on, Gehenna are downright unpleasant and ugly to listen to. One could argue that the songs are grim and necro-sounding, but there`s more to it than that. There`s so much hate and darkness to the entire album, and the dissonant melodies and riffs force one to listen to it numerous times before everything kind of falls into place. Not all the songs are equally interesting, but there`s enough good stuff on the album to keep one low and depressed throughout its 40 minute duration. My favorites include "The Decision", "A Grave of Thoughts", and the title track.

"Unravel" is a challenging album and one that will probably divide fans and listeners alike as to whether it`s great or not. For my part I can only say that I like it a lot. Don`t just listen to one song off this album and tell yourself "Nah, this sucks" or "This is good". Do me a favor and listen to the whole damn thing and notice how well the songs flow together. There`s nothing beautiful, harmonic, or pleasant to "Unravel", but something tells me that`s exactly how Gehenna planned it.

SECTORIAL – Erase and Reborn the Humanity