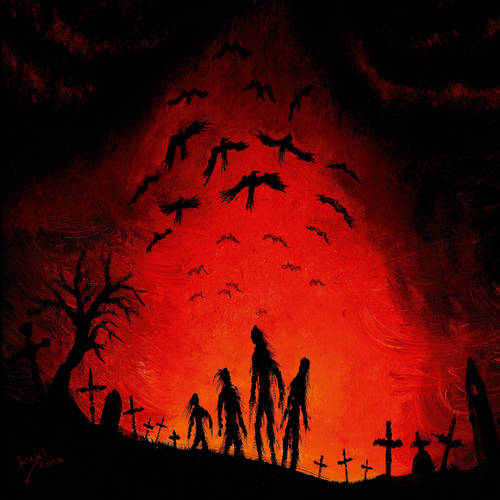 Another day, another cult band comeback. In the last couple of years we have seen a lot of successfull and some not so successfull comebacks from bands that had something to say in the heydays of extreme metal (that is late 80´s/early 90´s).

This time it´s death metal powerhouse Convulse that have risen from the (temporary) dead with their third full-length "Evil Prevails" (they released an teaser in the form of the two track "Inner Evil" EP earlier this year).

It´s been 19 years since their second attempt "Reflections"(1994) that where an ok follow-up to the cult classic "World Without God" from 1991.

WWG is one of my favorite albums from the early findeath scene and I still play it regularly so it was with some expectations that "Evil Prevails" entered the sterio.

The first thing that hits me is that vocalist Rami´s voice is not that good that it was some 20 years ago. The punch is not there and even though it´s deep but clear it´s not what it jused to be.

The production may have something to do with the statement above. All in all I think the album sounds flat and again, without punch. The material is good enough, both in the writing and the arrangements but that terrifying feeling that should hit you right between the eyes is missing.

One instrument that is very present and sound menacing is the bass. Original line-up bassist Juha delivers in both the performance and in the mix. He accompanies the drums in both the rythm sections and when nescessary in the chugging parts.

As said earlier, the material is good, but not great. The songs seem to just roll on and after a couple of spins I still have not found my favorites among the eight provided.

Convulse is back and all the childeren are happy (me included), but let´s hope their next full-length will take us back to those (un)happy days when "World Without God" ruled the earth.

AKTOR – I Am The Psychic Wars