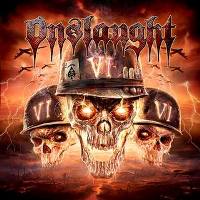 Back in the mid 80’s thrash metal was my life and Onslaught were one of my favourite bands. However, by the end of that decade, as we all know, thrash was beginning to groan under the weight of oversubscription and major label fiddling and the Bristol five-piece was one of the casualties. London Records had problems with long time members Jase Stallard  and vocalist Sy Keeler, causing them to be ousted, and the resulting 3rd album ‘In Search of Sanity’ was seen as a massive disappointment  by many fans, me included.

All of which goes to give some background as to my feelings towards ‘VI’ and the thrash movement as a whole. I want the album to be good but have a massive scepticism towards ‘big-sounding’ modern releases from established thrash acts. I listen to thrash all the time but I listen to thrash from the 80’s, virtually ignoring all new releases by the likes of Exodus, Destruction, Death Angel, Kreator etc. etc. etc. You might think that small minded, but I did follow the careers of all these acts as far as I could have far too many disappointing albums in my collection to prove it (Testament being the outstanding exception, and I’ll include Death too). As for modern thrash, I think there are some good bands at work at the moment. Vektor are a mile ahead at the top of the pile for me, but others such as Blood Tsunami, Warbringer and Nekromantheon have made a good breast of it too.

So on to ‘VI’: excellently produced thrash metal played with plenty of attack. The musicianship is tighter than Satan’s ass in a bath of holy water. Nige handles rhythm guitar only with Andy Rosser-Davies churning out stunning leads. Best of all is Sy Keeler’s vocal performance. Gone are the falsetto shrieks, but the snarling delivery of lyrics will surely be amongst the very best in the genre this year. Most impressive of all are the songs. Each one is packed with chugging, shredding riffs, yet the choruses and hooks are so well constructed that they do the job every time. Check out ‘66 Fuckin 6′ to see what I mean, or the slightly middle-eastern feel of ‘Fuel for My Fire’ to see a more nuanced and atmospheric approach.

For the final say, then: ‘VI’ is an unqualified success and likely to be one of the best thrash releases of the year. Which might make you wonder why I haven’t given it a higher score. The truth is, my heart is trapped in the late 80’s and I’ll be going back there to get my thrash kicks from Holy Terror, Sacrifice, Razor, Dark Angel and … er… Onslaught.