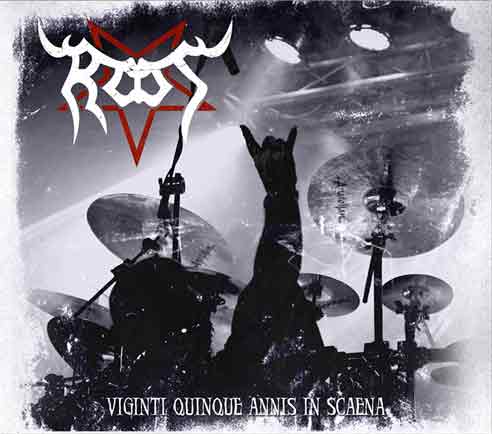 This is the first time that I have ever heard a live ROOT performance and I must say that I`m pleasantly surprised at how tight the band sounds on this latest audio assault of theirs. Their unique style of dark, occult, and epic black metal sounds quite punchy and atmospheric in this particular live setting that has been captured for posterity.

I really like the mix and production of "Viginti Quinque Annis in Scaena" in that it sounds quite vibrant, dynamic, raw, and organic. A live album shouldn`t sound touched up or sterile. The voice of Big Boss is still impressive, powerful, and booming in my opinion. Everything sounds very honest, and I have no complaints as such regarding the selection of songs.

The 12 songs that make up this live effort are all performed very well and every member of the band is pretty spot on in terms of delivering what is needed to evoke the dark essence of ROOT`s music in a live setting. One could even argue that this live album would serve as a good introduction to the band for any newcomer.

To sum up, "Viginti Quinque Annis in Scaena" is very good, consistent, and fittingly atmospheric throughout. As far as I know this CD will be accompanied by a limited edition live DVD containing lots of goodies from previous tours, so if you`re a fan of ROOT there`s hardly any reason why you shouldn`t check this live package out once it hits the streets.