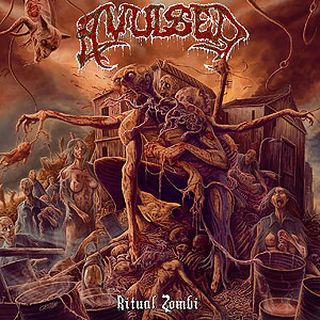 Spain´s Avulsed is pushing 20+ and are still as deadly as when they started out with debut "Eminence in Putrescence" back in 96. Their twisted into form of brutal and necrophobic death metal still holds the flag of hate high on their sixth full-length "Ritual Zombie".

Dave Rotten keeps his head to the dirty underground and the album reeks of old school cannibalistic death metal performed with just enough bravuda to sound gory and evil (without being to much over the top).

I personally liked 2009´s "Nullo" album very much so it´s nice to be bitten in the ass again by an horde of zombies. The production is heavy and distorted but not by any means sloppy, just mudded for the atmosphere of trying to put a scare in you.

The album runs for almost an hour with a healty dose of variation on the material. Not all is gory splatt, there are also some melodic parts and some arrangements that take a turn that was not expected of it.

Dave´s vocal is still as razorblade sharp as ever it really fit´s the musical landscape that is forced with an sledgehammer in between your eyes.

Avulsed also includes a cover of Death´s brilliant Zombie Ritual, a brutal take on the classic and I understand why it was nescessary to include it (for the sake of the name of course) but it when an album is packed full with quality death metal like "Ritual Zombie" is it just feels a little misplaced and not really needed.