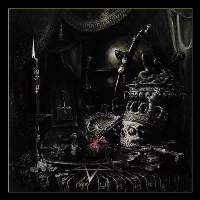 There is a considerable body of people out there who hail the first two or three Watain albums as classics of modern Black Metal and feel the band sold out with the Grammy-winning fourth album ‘The Lawless Darkness.’ A similar sized body exists who say they understand and accept Watain’s evolution and feel that their output since ‘Sworn to the Dark’ has expanded, developed and improved the band’s sound. I am part of the first group. I have been trying unsuccessfully for almost three years to get into ‘The Lawless Darkness’ but the simplest way to say it is that it doesn’t work for me on any level. And it isn’t as simple as it just being a dud album. It demonstrates the fall from grace of one of my favourite modern BM acts. A bitter pill to swallow.

So on to the ‘The Wild Hunt’. After intro track ‘Night Vision’ the first bars of ‘De Profundis’ gallop from the speakers. While not the most convincing track, the main riff is killer and it’s a fast one, filling me with hope that the three-piece have gone back to their fast and nasty roots. Unfortunately, the next three tracks are quick to squash that tiny black flame of hope. Each one is mid-paced with plenty of double bass and stop start action. It is as if the guys took the ‘God of death. Manifest.’ part from ‘Stellarvore’ and reworked it as many different ways as they could. Ok, so it was incredible the first time around, but it is starting to wear thinner than thin now. The problem with the mid-paced stuff Watain are so fond of these days is that firstly, as mentioned above, they are trading too much on what they have done before. We’ve heard the chord progressions, the epic pauses and the trundling darkness too many times already. The second problem with this type of material is that it is too soft for those who liked Watain back when they were raping angels. Not only is it too slow, but it is also far less evil and menacing that E & Co. think. The biggest problem though, is that ‘Black Flames March’, ‘All that May Bleed’ and ‘This Child Must Die’ all lack charisma and even though each has interesting parts, the choruses and hooks fail to grab. While the last of those is the best, I could happily skip them on each listen.

Track six is where things get really interesting. ‘They Rode On’ is a clean-voiced ballad almost nine minutes long, representing the biggest deviation from form we’ve ever seen from Watain. It is easily the best song of the album, creating a ritualistic trance that rises to an impressive crescendo and denouement. So while I’ve been moaning for three years about how Watain would be better if they sped up, they have regained greatness by slowing things down. Perhaps I should shut my fat gob! The next track ‘Sleepless Evil’ drives home the point as things speed up again and yet I don’t care. Title track ‘The Wild Hunt’ follows, returning to clean vocals and similar territory to ‘They Rode On’. While not as successful as ‘They Rode On’ it is still first class material. Throughout the album the musicianship is excellent, especially P’s guitar work and on these two tracks it is immediately obvious that he is clearly crossing over into ‘Guitar God’ territory. Why not? If they can win a Grammy, can’t the guitarist be on the cover of Guitar World?

Years ago, ‘Stellarvore’ shone a light on how Watain’s music would develop over the coming years and while I love that song, I didn’t care for what followed. If, in the same way, ‘They Rode On’ and ‘The Wild Hunt’ are any sign of what is to come from Watain, then the world is in for something that will be nothing short of rapturous. If that sounds like hyperbole, listen to the tracks.

The action continues with the quirky ‘Outlaw’, the melodic yet sinister instrumental ‘Ignem Veni Mittere’ and on to closer ‘Holocaust Dawn’. Finally, right at the end is the speed I wanted, done to the standard required and leading into an epic musical odyssey that aptly concludes the album.

‘The Wild Hunt’ is a strange assembly of songs. I would rate probably four of them as disposable: ‘Black Flames March’, ‘All that May Bleed’ and ‘This Child Must Die’ and ‘Sleepless Evil’. Ok, ‘This Child Must Die’ is the best of them and nearly makes the cut, but taken together they represent Watain at their worst, rehashing the past/trying to please Century Media/flailing for direction? Who knows? But not only do they not work, they damage my perception of the album as a whole. Without those songs ‘The Wild Hunt’ easily scores 5.5 and possibly 6. As it is, though, the good tracks are enough to drag the score back up to 4.5. Fans of ‘The Lawless Darkness’ will love this one and for those in the same camp as me – it is hard to deny that things are looking up. Am I finally catching up with Watain’s way of thinking of has their execution finally caught up with their vision? Perhaps I need another three years to figure that out…