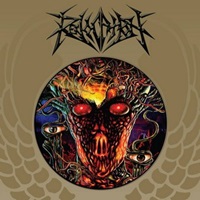 The fourth full length from Massachusetts technical thrash/death act Revocation is a self-titled effort that continues to see the quartet dig deeper into the realm of creating memorable, vicious arrangements while pushing the parameters of creativity and ingenuity. Rarely do you hear an American act willing to infuse diverse influences from international acts like Coroner, Sacrifice, Gorguts, Bay Area thrash, and their own sense of heaviness- and I guess that’s why I feel this band’s style is refreshing amidst a sea of mediocrity.

Guitarists Dan Gargiulo and David Davidson certainly know how to shred with the best metal guitarists in the business- and their sense for knowing the right time to harmonize or lay down a series of killer stair step riffs is on point with "Arch Fiend" leading the way- transitioning from electric to acoustic and back again. Bassist Brett Bamberger (newly installed last year) gallops away with the frantic pace on "Numbing Agents", and then moves along smoothly with the more mid-tempo Exodus meets Voivod effort "Fracked", the instrumental section again twisting with this off-time juxtaposition where he subtly takes the spotlight before the lead break kicks into gear.

And in the left of center department of the program, we have "Invidious"- throwing down a quick 6 second banjo burst early in the song that somehow works much like previous album’s organ solo frenzy during "The Watchers" and moving into a Forbidden meets Machine Head-like stomp by the conclusion. Overall the band just seem to apply more of a cohesive unit as the years move forward- unafraid to take a few chances be it with slower, more open drumming, dual guitar maneuvers and vocals that cross the thrash/death lines.

10 songs that fly by in 46 minutes, Revocation continue to be one of the shining American beacons along with Vektor in this technical thrash/ death style. Their ability to be musical without always resorting to sheer speed to blow your speakers to smithereens proves they are one of the leaders in this movement.

ZAFAKON – War as a Drug

GARDEN OF – The Mountain King