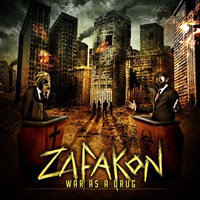 ZAFAKON – War as a Drug

Recently gaining the chance to witness a show on their North American tour this summer, I immediately picked up this debut album from Puerto Rico’s Zafakon, a thrash band with slight crossover/ death appeal. Guitarist / vocalist Marcus Veit possesses a quick hitting growl and killer screams that recall the veteran voice of Mille from Kreator. The biggest asset the quartet confidently display is versatility- the rhythm section in particular with bassist Weslie J. Negron and drummer Nicolas Burgos can handle hyper fast, almost hardcore/ punk sections of "Fall" just as easily as settling into a comfortable mid-tempo thrash groove a la Sodom or Slayer for the follow up "In Resistance".

The riffs straddle the line of old school thrash from the Bay Area, early death elements from Florida, as well as a sprinkle of the Lamb Of God current angst to help Zafakon appeal to a wide cross section of metal fans. "The Call of Winslow" wins me over instantly with this feverish picking propensity between Veit and lead guitarist Rafael Romero, hitting all the transitions in the right spots for maximum body slamming impact- the ‘no mercy’ snarl from Marcus giving a tip of the cap to Chuck S. of Death.

Understand that when you are doing everything on your own, production values may not mirror the major independent labels- but that rawness captures a four-piece band intent on delivering the goods with their brand of thrash. Zafakon with these 9 tracks are on the right path to win converts because they bridge multiple styles without watering down their sound. And check out the guest vocals of Joel Grind from Toxic Holocaust on the hyper-fast "Summoning the Vortex" – right on target for this arrangement.

2013 continues to be a strong year for thrash- and Zafakon give me hope for its future development.