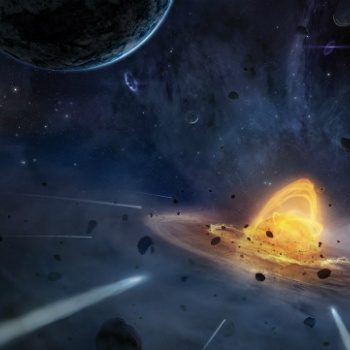 I love the idea of split releases in that you get the chance to check out two or more different bands at the same time. Once in a while the one band will suck while the other one will rule in which case it hasn`t been a complete waste of time listening to the split release. However, there`s always the possibility that both bands will be very good and complement each other beautifully, which, luckily, is the case with this split CD on which Spectral Lore and Mare Cognitum figure.

Both bands/projects perform black ambient music, which is to say melancholic and introspective ambient music mixed with epic black metal-sounding parts and melodies. "Sol" contains 3 songs; "Sol Ouroboros" by Mare Cognitum, "Sol Medius" by Spectral Lore, and "Red Giant", which is a collaboration between the two artists. The whole release has a very cosmic and otherworldly vibe to it, and I must say that it just oozes loneliness and sadness to my ears.

Both acts strike a fine balance between the calm parts on the one side and the aggressive ones on the other. There are contrasts to be found in the music, but when listening to these 3 songs the gaps between the extremely mellow and the intense outbursts are bridged rather well and one hardly notices how or when the mood and intensity suddenly shift. It all flows rather organically and sounds so natural. I probably like "Sol Ouroboros" the most, but don`t get me wrong; this is a strong release containing quality music all the way through it.

We`re served 70 minutes of music here, which may be too much for some listeners, but I have no problem with that whatsoever due to the quality of the music. All open-minded listeners should check this split release out, but just remember that a bit of patience is required and that it may take more than one spin to grasp what this is all about. Some parts are catchy while others are slightly more complex and strange, but give it time. I certainly found this to be quite rewarding.