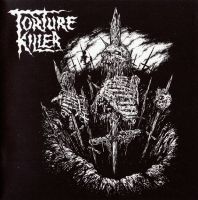 Widely known for the erstwhile involvement of DM superstar Chris Barnes, Finland’s Torture Killer have been plying their trade for a little over a decade now. As you can imagine from a band who started out playing Six Feet Under covers, their fourth full length ‘Phobia’ consists of driving, groove-laden mid and slow paced DM. In fact there are more than a couple of tracks on offer here that sound like ‘Zombie Executioner’ for the first couple of bars. But that isn’t something I have a problem with. I’m pretty sick of the generic, contemporary brutal/technical DM and the 50 albums that come out each month from bands that know how to play but haven’t an original idea in their heads. All of which means I like Torture Killer (and Six Feet Under for that matter). I like the fact that they aren’t afraid to rock out and that they concentrate on atmosphere and crafting songs that will have the listener grabbing for their air guitars. I like the fact that they aren’t caught up with trying to fit as many sweeps and pinch harmonics as possible into every riff. But ‘Phobia’ also works for me because I like the songs. Ok, it isn’t going to make it to my year’s best list, but it is an enjoyable listen and one I’ve been coming back to time after time, and what’s wrong with that?