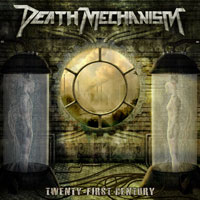 There’s something primitive about a metal trio that keeps the style honest and sincere. The musicians better know what they are doing, as there isn’t any room for empty space or errors in craft. Italy’s Death Mechanism is another trio pursuing their creative philosophy in the semi-technical speed/thrash ways on this third full length album "Twenty First Century". The vocals are caustic and raspy, the guitar blaze and the lead breaks are frantic with Slayer-like energy, and the bass/ drum component thumps and rages with Sadus meets Coroner pacing.

Amid all the razor-like picking and helter-skelter riffing, you get the slower marching strains during the instrumental sections of "Human Limits" or the slow snare hits against steady double bass for the groovier "Tipping in Front" that proved Death Mechanism isn’t all about aggressive assault, that at times laying back can have just as massive a result for memory sake. Guitarist Pozza also doubles on the vocal front, and he has the patented Mille from Kreator meets Chuck from Death sandpaper delivery down pat, verbally spewing seemingly a hundred words a second in the verses of "Obsolete Cults" and using slight reverb echo to enhance trailing parts of "Earthly Immortality".

It’s nice to not hear an act break out of the conventional Bay Area or Teutonic approach and inject a little bit of swirling semi-technicality into their brand of heads down speed/thrash. Could the production be better? Sure- the sounds are very natural, especially in the percussion arena where I feel the snare snaps and stop/ start tempo transitions. Overall though it’s the final output that matters most- and with "Twenty First Century", the intensity and aggression comes through in spades, and makes this a record I will continually return to for that left-field dynamic outlook.