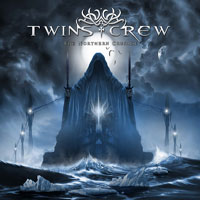 Stockholm, Sweden may be better known for its death metal fertile grounds, but there are still a number of acts who ply their trade in other genres- such as this heavy metal/ power metal sextet Twins Crew. Aptly named due to their guitar duo of David and Dennis Janglov (twin brothers), they’ve been together since the summer of 2007, recording a couple of self-financed demos/ EP’s before their debut album "Judgement Night" hit the streets in 2010.

"The Northern Crusade" is the 10 song follow up, filled to the brim with charging power riffs, multi-tracked choruses designed for audience sing-a-longs, and all the double bass/ guitar hero lead breaks you can shake a stick at. Helloween, Stratovarius, and Iron Maiden would be so proud of their work influencing Twins Crew- "Last Crusader", the fun-spirited "Dr. Dream", and slightly ominous "Heaven Awaits" on par with their best output through the years. Singer Andreas Larsson is more of a vocal chameleon with Tobias Sammett meets Geoff Tate tendencies, although he can hit some falsetto highs when called for ("Unholy Grail" probably his highlight performance of this record). The keyboards from Nicko DiMarino often serve as another syncopated element to fuel the happy, up tempo charge.

Expect lyrics in the vein of warriors, kingdoms, and the love of heavy metal- and the requisite black denim and leather look to tie everything all together. Twins Crew may not be the most original power metal act out there, but if you miss 90’s era German acts with a touch of the 80’s Maiden/ Priest prowess, "The Northern Crusade" can be your savior platter to champion.