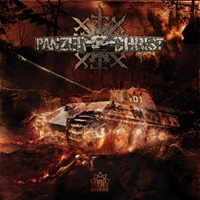 The Danish blackened death metal quartet Panzerchrist seem to lose no steam despite interchangeable players throughout their 20 year plus existence. With more ex-members than years put in (22 by my count through an internet research expedition), should it be a shock to the system that this seventh studio album features new guitarist Nils Petersen and vocalist Soren Tintin Lonholdt?

Ultimately Panzerchrist is about obliterating the listener with a ferocious blend of growls, mid-tempo to speedy riffing, and insane drum tempos that can be double bass/ blast filled one measure, or militant and pounding the next. Occasionally using cyber/Voivod-like computer effects on the vocals for "Stronghold of Hill 666", for the most part the band employ a load of Morbid Angel/ Dissection style trilling, aggression, and slight melodic nuances to gain some sense of control over the proceedings.

Simon Schilling hits some odd-time snare triplets in "Drone Killing", and knows how to blast with the best in the business- he could be the four-piece act’s best musical weapon through tracks like "In the Name of Massacration" and appropriately speedy "Napalm Alarm". I do enjoy the interjection of cultural textures as well as the closing "Pig Parade" which essentially is a two minute soundtrack number that makes you feel like you are participating in a military camp exercise.

Panzerchrist are not the most technically savvy group around- they prefer sheer blackened death riffs, effective heaviness, and deep gurgling growls in the vocal department. As such "The 7th Offensive" will not be a surprise to long time followers- so if you enjoy meat and potatoes albums that stick to tried and true concepts, these Danes will fill your metal appetite quite nicely.