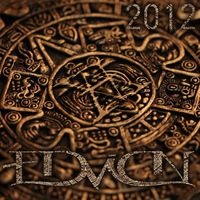 A Russian progressive metal quartet, Edvian is the brainchild of two brothers Victor Plitkin-Cherkasov on guitar and Andrew Plitkin on drums, filled out with bassist Ivan Nechaev and vocalist Alexey Serov. "2012" is their debut album, an 8 song effort that features an astute sense of vocal harmonies and a streamlined sense of musicality, keeping in mind tight arrangements amidst all the off time interplay and technical brilliance.

1990’s era Dream Theater, older Symphony X, as well as a slight fascination with the cyber-electronic world factor into key songs like "Storm", "This Is War" and the bass savvy title cut. The songs for the most part are compact for progressive standards (only the opening track clips the 6 minute mark, and most are in the 4-5 minute range), but do not mistake the brief arrangements for a lack of complexity- as there are plenty of shimmering syncopated moments between guitars, bass, keyboards, and drums. Alexey has a smooth delivery to his voice, amazing phrasing and understanding of English pronunciation with one of the highlights being the mid-tempo "Cradle of Life".

The mastering I think effects a lot of the lower end impact, but for the most part "2012" reminds me of a golden era in the progressive metal genre (1992-1995), when Dream Theater were willing to push the boundaries a little bit for their sound. A decent start for Edvian, I’ll be curious to hear what future songwriting direction the band will put forth as an exploration of the cyber-electronic elements could prove to be very fruitful in capturing their own distinct style.