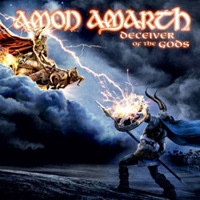 When you are one of the leaders of the Viking metal / melodic death metal like Sweden’s Amon Amarth, there are two paths you can take. Deliver more of what you know will appease the masses, or decide that the time is ripe to adjust a few elements in the hopes of keeping things fresh from within. On the ninth studio full length "Deceiver of the Gods", the five-piece travel to England and worked with renowned knob-twiddler Andy Sneap (Accept, Testament, Arch Enemy) to attain a different tone that would capture what the band is like closer in live situations.

The opening title track begins with these slower melodic twin guitar harmonies before the tempo kicks into galloping gear and you can sense Amon Amarth remain steadfast in their belief for Viking metal. Johan Hegg will never be mistaken for anything clean or conventional with his delivery: and yet his growling nature has this unmistakable charm that is comforting through the years. The follow up "As Loke Falls" should be a future crowd favorite, the first two riffs igniting the cultural sing-a-longs/ clap-a-longs necessary for energetic exchange, the guitar work from Olavi Mikkonen and Johan Soderberg fiery and deadly with melodic finesse (a little folk meets Maiden-like to these ears). The rest of these 10 songs move between mid-tempo anthems and slightly faster, gallop-like riffs that still deliver heaviness and dark attitude- favorites including "Shape Shifter" and the doomier "Hel", featuring some guest vocals from the one and only Messiah (ex-Candlemass) to contrast the underwater Johan growls.

Amon Amarth stylistically keeps their eyes on the prize- their brand of Viking metal well established, balancing out the death with traditional metal strains. Most who are fans will continue to be- and those unconvinced will remain that way as well. "Deceiver of the Gods" is decent to my ears- but for some reason Amon Amarth will never be one of those elite acts to champion decades from now.