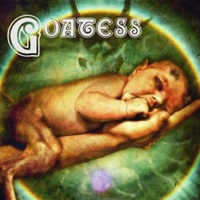 The art of creating a hypnotic riff: metal has universally lived off its long-standing appeal. The correct semblance of chords that builds into something that reverberates incessantly in your brain- gets you out of bed and simulating its movements spasmodically. Goatess hail from Sweden and would be another four piece taking the doom style to stoner groove heights on their debut self-titled album. Vocalist Chritus Linderson has a wealth of experience playing with Count Raven and Saint Vitus among others. Goatess began as an experiment with jamming out to a sound that desire to hear- a powerful low end with an emphasis on acts like Sleep and Kyuss infiltrating a known doom construct.

The average song length is between 7-11:52 (outside of "Oracle Pt.1: The Mist" at a paltry 4:40, a more psychedelic number with loads of looped Middle Eastern guitar lines and keyboard segments), so expect drawn out instrumental sections with deep, lumbering snare hits, and bass play that is as important to the set-up of Goatess’ sonic outlook as the all might electric guitar output. "Know Your Animal" starts off the album with this simplified guitar run that’s very clean but addictive, alternating into pure fuzzbox electric bliss as Chritus takes the words with measured assertiveness. "Ripe" is another instant winner, the bass lines bluesy while the guitars and drums fall into line in a Trouble meets Count Raven way. "Full Moon at Noon" contains a main riff very similar to what I would expect the right mixture of Soundgarden and Black Sabbath to be- with Chritus hitting all the right high and low notes to bring this arrangement home.

At 66 minutes "Goatess" is more of a slow burn than a quick fix in the stoner doom/ metal scene. And that’s fine by me. Let’s hope that Chritus’ main work with Lord Vicar does not impede the progress of this band, as I think they are onto something potent and addictive to a large section of the underground.