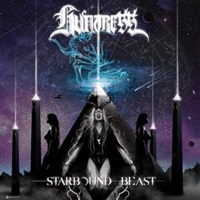 Jill Janus, lead singer for Huntress, is not your prototypical heavy metal vocalist. She is not afraid to flaunt her sexuality, and at the same time displays a range that fluctuates between normal clean singing and deep extreme growls/ screams- often within the same song. For their second album "Starbound Beast", we have 10 tracks of straight ahead heavy metal with a fusion of American power and European guitar hero licks and harmonies on display.

Tracks like "Zenith" and "Destroy Your Life" contain the requisite point/ counterpoint rhythms and harmonies from guitarists Anthony Crocamo and Blake Meahl that gallop, march, and steamroll to those who love early Savatage, Iced Earth, and Annihilator/ King Diamond. The title track is more of a mid-tempo, Judas Priest style offering, a touch doom in the chorus while Jill rises and descends with her classic metal voice. Expect some tongue in cheek lyrics, especially with first single "I Want to F*** You to Death" (sample line- ‘I am always a victim of the pleasure I seek’), and a spritely production with a lot of kick in the drum department, as Carl Wierzbicky hits some thrilling, steady snare and fill parts for "Receiver" and the epic closer "Alpha Tauri".

This album won’t tarnish their reputation, but I didn’t really hear much overall that kept me excited in a ‘you have to hear this riff/ melody’ way. Adequate songwriting probably translates to above average live performances, but for now "Spell Eater" is the better of the two Huntress studio albums to date.