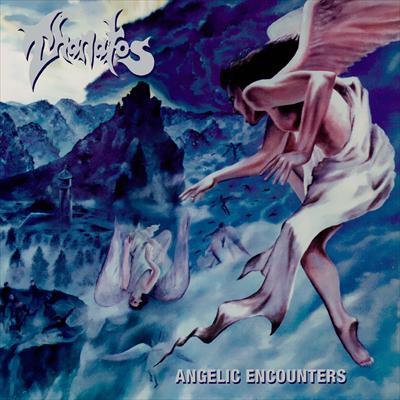 Thanatos are considered the first extreme metal band from Holland with history way back to 1984. They released their debut "Emerging from the Netherworlds" in 1990 and have since then only released four more full-lengths (five in total).

They hail from the mighty Netherlands where they paved way for (maybe) more knonw acts like Pestilence, Sinister and Asphyx.

Thanatos have been an steady act to follow and its then members on this album have now fame from other dutch extreme acts that make their mark considerably.

On vocal is Stephan Gebedi, latealy known from his guitar work in Martin Drunen´s Hail of Bullets and even though Drunen have a much heavier voice Stephan can for sure deliver the goods too.

Theo van Eekelen have history from both Houwitser and Judgement Day but "Angelic Encounters" is the only Thanatos album he recorded with the band.

On drums is Aad Kloosterwaard who also is main man in Sinister and on guitar is Paul Baayens who delivers the goods in legendary Asphyx.

So even though "Angelic Encounters" is not a supreme album in my book it sure have its momenets. Stephan´s juse of both raspy and high shrieks growling makes some of the material more exciting but the main challenge is the variation of the material.

The songs are all up there on the technicality and intensity but they all have a problem with sounding unique among nine that are delivered.

After a couple of listens the thrash parts of Thanatos is what makes the songs stick out but I enjoy the death moments more with Sincere Chainsaw Salvation as an example.

But all in all this a decent album that with this re-release hopefully gives Thanatos some more recognition because they sure deserves it both for their muscal quality buth also for being the dutch pioneers of the genre we all love.