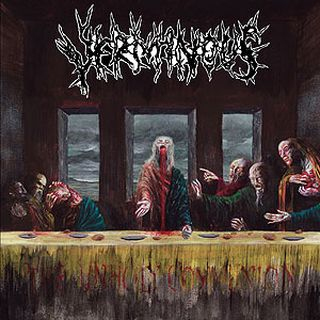 The Swedish death metal force named Verminous have returned after a 10-year hiatus and recorded their follow-up to the "Impious Sacrilege" album (2003). Things haven`t really changed that much since 2003 in the sense that Verminous still sound like Verminous and that their particular brand of death metal is still unrelentingly filthy, rotten and disgusting to the very core.

"The Unholy Communion" is comprised of an intro and 9 songs that total approximately 32 minutes of blasphemous music. The songs are all fittingly long in the sense that they never become boring, stale or repetitive. They are all well-arranged and crushingly heavy. It`s also pretty evident that Verminous haven`t just come up with a handful of riffs and recycled them over and over. This record is filled to the brim with memorable and bombastic riffs that`ll make your head rattle and your hands and feet shake.

I can`t help but compare these guys to Autopsy and Repugnant. I`m not saying that they sound like a cheap rip-off or anything, because they certainly don`t, but the whole vibe and atmosphere of "The Unholy Communion" as well as the organic and dynamic sound and production simply ooze rotten, old-school death metal with a horror-infested lyrical approach in the vein of Autopsy. Verminous aren`t original or innovative and I`m pretty sure that they don`t want to be either, but what does that matter when we are dealing with an album that contains only killers and no fillers?

I strongly recommend all you death metal fanatics to check out "The Unholy Communion". I`m pretty damn sure that people who are into bands such as Autopsy, Grotesque, Dismember and Repugnant, or just morbid music in general, will dig Verminous. I know that I do.