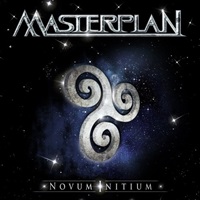 Change is a constant in today’s music business. Priorities differ, people need to make a living, and sometimes individual freedoms win out over group satisfaction. In the case of Masterplan, vocalist Jorn Lande felt the time was right to step away from the band for the second and probably final time- leaving guitarist Roland Grapow and company the chance to roam the globe for a suitable replacement. It is not easy filling the shoes of Jorn- as he can easily replicate the catalogs of Ronnie James Dio and David Coverdale without breaking a sweat. So for "Novum Initium", Masterplan MK III signals the recruitment of veteran vocalist Rick Altzi, who you may have heard recently with At Vance or through the years within Thunderstone, Herman Frank, or Sandalinas among others.

With 3/5ths of Masterplan new members (bassist Jari Kainulainen and drummer Martin Skaroupka joining last year), the fifth studio full length can be viewed as a transitional record, with band members sliding into their roles and assimilate to Roland’s flair for developing melodic power metal with a heavier, sometimes darker edge. Musically the band continue their mix of catchier, radio friendly efforts like "Black Night of Magic" and "Earth Is Going Down" with the more power oriented numbers like "The Game" and epic 10 minute plus closer "Novum Initium" where Roland showcases his Malmsteen meets Blackmore neo-classical chops against an arrangement that is part Helloween, part Kamelot, and intense all around.

Rick will never replicate the wonder and talent of Jorn- that’s a given. But his range does have elements of Coverdale and Dio, just with more of a bluesy overtone. It may take another album to fully ingratiate himself into Masterplan’s style, but I think he’s on the right track and a better fit that Mike DiMeo from MK II of the band.

Supposedly now ready to gain more traction with road work, "Novum Initium" isn’t a poor effort by any means- merely another fork in the road where they needed to take a step back before getting up to speed to solider forward sans Jorn.

IMPALERS – Power Behind the Throne