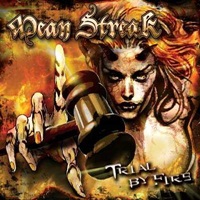 The time has come for the third album from Sweden traditional/ power metal act Mean Streak. I’ve been fortunate to take in their two other records and both receive fair airplay still- "Metal Slave" from 2009 and "Declaration of War" in 2011. With new guitarist Tomas ‘Plec’ Johansson entering the fold in 2012 replacing Patrik Gardberg, the core quintet remain steadfast in their resolve to deliver catchy anthems laden with strong guitar riffing, vocal prowess, and proper rhythmic accompaniment.

Opening out of the gate with one of their catchiest power numbers to date on "We Are One", the fluid lead break recalls "Metal Heart" era Accept while the commanding chorus harmony is straight out of Dream Evil meets Nocturnal Rites playbooks. "Shine On" takes the tempo down to anthem status, recalling the early days of Dio- almost a distant cousin to "Seventh Sign" from Mean Streak’s debut album, the ‘woo-hoo’ background vocals giving the song a little bit of a Def Leppard feel. At times guitarist David Andersson, bassist Peter Andersson, and drummer Jonas Kallsback align as this formidable militant charge- check out the Accept/ U.D.O. oriented "Thunderbolt" and the subtle hard rock shuffling that occurs within "Let Love Rain" to understand the band’s creative chemistry and intuition allows for some killer hooks and songwriting with this record.

Andy La Guertin as a singer has many facets to his voice that lend themselves very well to a versatile hard rock and metal palate. He can be playful and inject his personality at times in material that’s more stripped down and bluesy such as "Tunnel Vision", restrained and tender for the acoustic ballad "Cast Away"(love the cello accents on this one), or all out balls to the wall metal and fierce for "Bad Blood" and the title cut. Top things off with another striking cover piece (continuing their female theme once again) and you have the makings of a band who stick to what they know best and deliver for maximum effect.

"Trial By Fire" proves Mean Streak is ready for the big leagues.