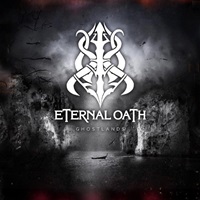 After recharging their collective personal batteries with a 5 year absence from the scene, Sweden’s Eternal Oath return with their fifth studio album "Ghostlands". The sextet display a brand of melodic death/doom with a sprinkling of gothic and symphonic nuances that keep their sound variant and original to these ears. "Tears of Faith" reverberates with doom sweeps and alluring keyboard parts as the death growls and contrasting clean echoes send chills and goose bumps all over my body. Drummer Ted Jonsson adds all the right lightning quick fill work to carry the otherwise straightforward, latter day Cemetary-esque "Remnants of Yesterday".

The band divide their arrangements into two camps: the longer, epic oriented where the doom elements seem to carry over such as "Stolen Innocence" and the hypnotic, melodic closing title track or the shorter, slightly more up tempo efforts where I think some of the more harmony laced guitar work and gothic/ symphonic keyboards gain broader attention such as "The Cross I Bear" and "Bleeding Sympathy"- the latter a favorite for its "Children of the Grave" tempo. Joni Maensivu as a vocalist commands respect for this gruff, low growl that many Scandinavians cherish- it is deep but discernible, something I wish more North American singers would think about in this genre.

I can see certain people not digging the almost dance-oriented keyboard swirls and electronic drum elements for a song like "Hymn for the Fallen" – but this Paradise Lost-like arrangement provides the dynamic contrast Eternal Oath needs to separate itself from the pack. Overall "Ghostlands" sounds like a potent return for this band, taking the time to churn those creative fibers into strong riffs, hooks, and memorable songs.