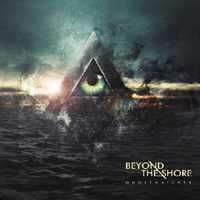 Many will argue this point, but metalcore is and always will be a legit sub genre of metal.  Hardcore music in general has had a huge influence in metal and will always be a part of it.  No argument can be made against that of which would make any sense.

There are, however, different levels of quality out there, as with any sub genre.  Metalcore has gotten a bad name from the really awful entries that got very popular.  Norma Jean and Atreyu come straight to mind.  Then there’s the top tier stuff, like Heaven Shall Burn and Maroon.  And then, there are some who are right in the middle.  They’re not bad, but they have some tendencies that could make them such.  One such band is Beyond the Shore, of which is the subject of this review.  Notably, their latest album, "Ghostwatcher".

From the first few seconds of album opener "Half Lived", an immediate problem rears its ugly head.  This stuff is way, way over triggered.  It sounds too mechanical, and not at all organic as music should sound.  More and more bands are doing this, and it’s bothersome.  A little bit more of a "natural" approach, and Beyond the Shore would sound so much better, as one can hear the talent there.  It’s simply being held back a bit.

There are very good riffs on "Half Lived" though, so it is salvageable.  "Transitions" contains a few quality melodies; "Glass Houses" has some good vocal patterns to go along with some of the better drumming on the disc.  Bad tendencies pop up on songs such as "Visions", with some mediocre breakdowns taking up too much space and not allowing the song to breathe a bit.

I’ll give Beyond the Shore more credit than most metal people would.  Their guitar work is very solid, and their song structures aren’t decent for the most part.  A little more variance in the usage of their breakdowns, and ditching that overly produced trigger madness would make Beyond the Shore a winner.  At times it’s almost as if they’re holding something back.  Go for a bit more of a raw production and come out swinging next time, guys.  Look to Shai Hulud on how to do that better than almost anybody on the planet.  If you dig metalcore in any way, "Ghostwatcher" is worthy of a try.  Just don’t expect perfection – yet.