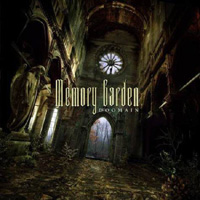 Doom with a twist.  That description fits Memory Garden like a glove – just not OJ’s glove.  Yeah, that was pretty lame.  Anyways, these guys have been doing their thing for a good long time – since 92 – and have established a solid track record.  We now come to the new disc, cleverly titled "Doomain".

Memory Garden have always had a distinct approach, as mentioned previous.  They play doom metal, but with mostly traditional metal clean vocals.  It’s very different than the usual despair-filled growls one would expect to accompany this style, but it works for them and has given them a solid identity.

The album starts with a band with "The Evangelist", hitting the listener with pulsating drums and a very down tuned and punchy riff.  The tempo goes up a bit when the vocals hit, and the song stays a pretty mid-tempo range throughout.  This isn’t as downtrodden as, for instance, Evoken or the like.  There’s a bit of "pop" in Hanging Garden’s music, with some very obvious traditional metal influence being a large part of their sound.

"Latent Lunacy" is another track that stands out, especially with the sharply penned vocal lines and the very slick guitar work.  "Barren Lands" is one of the heavier offerings, but also containing the most melody.  "Violate & Create" is a speed demon at the start, with the song slowing down in the middle, and finishing off with a flurry.  There’s a good mix on offer, lending credence to Memory Garden’s solid song writing ability.

"Doomain" is a very good record from a band that knows what they want to do.  That’s a good quality to have, and these guys are surely focused and have come out with a resultant they can all be proud of.  If you’re looking for slow funeral death/doom, you’re not really going to find that here.  For those who dig something that has some doom qualities, but also harkens back to metal’s early days, Memory Garden’s latest should be on your radar.