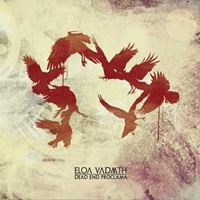 We currently thrive on internet closeness- where recommendations can come within your fingertips. Checking out the roster on Noisehead Records thanks to one of my editors, I came upon this Italian avant- garde progressive death metal band Eloa Vadaath- and then learned that members of Australia’s Ne Obliviscaris also speak highly of this quintet. This second album "Dead End Proclama" can be an overwhelming aural experience upon initial listening- but rest assured if you live for music that expands horizons, visions, and innovation, Eloa Vadaath deliver on all fronts and then some.

How does one delve into an album with violin and sitar sitting side by side with blast beats, dual clean and extreme vocals, a rhythm section up to the energetic, progressive challenge and guitar interplay that develops as an exciting cat and mouse maze where you never know what lurks around the next riff or time change? You’ll hear sparse lead breaks against shimmering electric guitar for "Vever" that rivals the best David Gilmour moments- then take in violin insanity against poly-rhythmic progressive madness for "The Sun of Reason Breeds Monsters".

My favorite moments include the low churning circle riff that transforms and takes off into avant-garde progressive madness for "A Dead-end Proclama, Mr. Goldstein" with hints of Kansas, Dream Theater, Nile, and Fair To Midland all in there even with the speed of time changes and the 7:53 "Ad Rubrum Per Nigrum" with its quieter, exotic opening (the whispering vocals a nice touch) and lifting from acoustic guitar heroics to electric toughness with insane double bass /open thrash snare hits at the 4:03-4:17 mark. One can only imagine the depth of discussion and experimentation that takes place in the pre-production stage, as it’s not easy to wrap your head around these compositions- even after 30-40 sessions like I have prior to review.

Nausea may ensue if not prepared for twists and turns in a mini-second. Eloa Vadaath should tour with Ne Obliviscaris and they’ll set the progressive death metal world on fire.