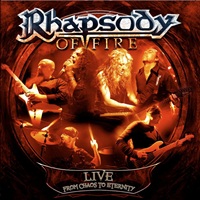 RHAPSODY OF FIRE – Live- From Chaos To Eternity

A double live album from the Fabio Lione fronted version of the band (as the split with guitarist Luca Turilli means we have two Rhapsody bands furthering their market share, his known as Luca Turilli’s Rhapsody), "Live- From Chaos to Eternity" contains 24 tracks and 106 minutes of symphonic power metal entertainment. Recorded on their spring 2012 European tour, one can easily expect tons of audience sing-a-longs, hitting all the right choir parts and also sinking into the narrative elements that make the band so cinematic as if taking in a fantasy soundtrack.

The range of material is up and down the back catalog: "Dawn of Victory", "Holy Thunderforce", and "Emerald Sword" all go down a storm, as well as 3 new cuts from the last studio album, 2011’s "From Chaos to Eternity". Keyboardist Alex Staropoli plays as important a role in the sound of the band as guitarists Tom Hess and Roberto De Micheli- neo-classical virtuosos acting as one with adventurous runs and cultural texture added in all the right layers. There’s an obvious reason why when a band like Kamelot was in a pinch with live touring on the horizon and no full time replacement ensconced in the lineup that Fabio shines- he can hit those falsetto highs with conviction, but has proven through the years there is also a tougher and evil side on songs like "Aeons of Raging Darkness" and "Reign of Terror". Drummer Alex Holzwarth gets a 2 minute drum solo segment and his brother Oliver performs "Toccata on Bass", a classical piece in line with the band’s obvious influences.

They’ve built quite a following the world over, probably due to their establishment with a strong discography and finally making the band more active on the live front. As such, this is a decent document of current Rhapsody of Fire, and we shall see with the next studio album if there is any variance to the symphonic power metal formula at hand.