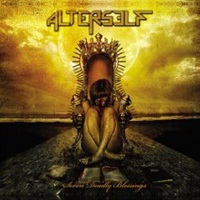 Greek technical death/ thrash here from this quartet Alter Self- who release their debut album "Seven Deadly Blessings" after a couple of years break due to mandatory military service obligations. Tight stops and starts along with relentless attention to proper riff flow make crushing material such as "Storms Gather", "Netherlight", and doomier, death-oriented "Bleed Through Me" appealing in an instantaneous, no-frills way. Guitarist Andrew Geo doubles up on vocals, and his raw, gruff nature keeps the band firmly in the underground category- although his riffing and lead breaks along with fellow guitarist Alex Paris have more of the seasoned Bay Area chops in place.

"Seven Deadly Blessings" also rules because bassist Giannis Marinatos isn’t relegated to root note background fodder- the man can actually drop some serious progressive chops and groove with the best of them- check out "Fovea" and "Flesh Scripture" for his frantic, fleet finger work. I do think the band overall need to be a touch more critical of the final arrangements though- some of the riffs within "Separation From God" reach conventional Slayer/ Sepultura territory, which could bore certain listeners looking for more originality.

Imagine latter day Death (circa "Individual Thought Patterns"), Coroner, and the Bay Area thrash twists of Dark Angel or Slayer in terms of musicality and aggression intertwined, and this is the foundation of Alter Self. A decent start, I predict a healthy future for these gentlemen as talent is obvious as well as a firm knowledge of where they want to go with their songwriting.