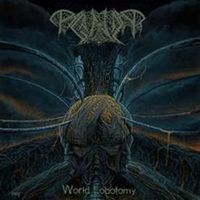 In today’s metal scene, rare is the time when original lineups remain together 15 years after their conception. Outside of bassist Dennis Blomberg (who joined in 2012), the other three members of Paganizer on this ninth full length "World Lobotomy" are the same who started during their demo days: vocalist/ guitarist Rogga Johansson, guitarist Andreas Carlsson and drummer Jocke Ringdahl. The quartet is not out to blaze a new trail in the death metal movement- they prefer to remind people of the potent power within the original old school development.

The 12 tracks for "World Lobotomy" present a healthy serving of slower to mid-tempo guitar rhythms, adequately down-tuned for darker effect plus punishing drums with persistent double bass along with Rogga’s harsh growls carrying the words with equally chilling atmosphere. When the blast beats appear for sections of "As Blood Grows Cold" or "The Drowners", it never detracts from the arrangement but rather accents the next upcoming riff change. "As the Maggots Gather" surprises with this almost Clive Burr-like drum salvo from Jocke that proves he’s not the prototypical death drummer, while closer "Hunt Eat Repeat" contains this punk-oriented up-tempo arrangement with a chorus designed for call and response action from the audience in a Napalm Death way.

Paganizer loves the big four of Swedish death metal in all elements of their songwriting, tones, playing abilities, and production values. So it is my belief that if you miss that 1988-1992 era of death metal history where Entombed, Grave, Dismember, and Unleashed crawled from the underground and into their early record contracts, "World Lobotomy" will fit right into that niche of your collection.

THY SYMPHONY – A New Beginning