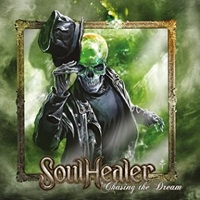 Melodic heavy metal is SoulHealer’s calling card for this second album "Chasing the Dream". Some of the drumming triplets and nifty guitar/bass harmonies certainly evoke the 1980’s Iron Maiden era- check out "Don’t Look Back" and the 7 minute plus closer "Smoke & Mirrors" for spirited, stair step riff building. At other times the quintet prefer to hone in on a hard rock slant, keeping the 4/4 groove while the guitars churn out chords that made The Scorpions arena headliners on "Love At First Sting"- as the main riff of "Done For Good" could be a twin to "Bad Boys Running Wild".

Overall on the album you just feel enveloped by the old school spirit- be it the swirling drum effects during the 3:22-3:34 instrumental portion of "Ties of Time" or the Randy Rhoads meets NWOBHM contrasts of clean verses and heavy, harmony-oriented buildups for "Never Turn My Back On You". What will be the deciding factor in permanent enjoyment for most consumers comes down to the range and delivery of vocalist Jori Karki. It’s a strange brew to put into words: he has a lot of the gut level elements of say Graham Bonnet, but then again more of a Scandinavian twist like Messiah from Candlemass- just in a slightly rawer format. Looking at the quieter sections of "Smoke & Mirrors", you can clearly hear both his strengths and weaknesses- and he is better served with SoulHealer to work off his lower and middle registers while keeping the high piercing parts at a minimum.

Overall though, the professionalism in musical quality and shimmering dual guitar harmonies win me over- so as such "Chasing the Dream" will be ideal for those who want that melodic hard rock/ metal crossover that made 1980-1984 near and dear to the hearts of fans across the world. And what’s not to love about SoulHealer’s cover art- a skull man with a leather jacket and top hat to match?