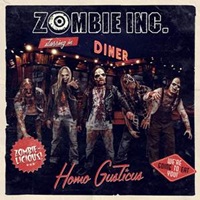 Some bands you need to take with a grain of salt- or attempt to plug into their sense of humor. Take Austria’s death metal quintet Zombie Inc. – which features in their ranks former Pungent Stench vocalist Martin Schirenc and Disbelief guitarist Wolfgang Rothbauer. A shift in the rhythm section ranks during 2012 allows bassist Martin Arzberger and drummer Florian Musil to join the fold- rounded out by second guitarist Gerald Huber, and so we partake in the second full length offering "Homo Gusticus".

The cover art with slogans such as "Zombie Licious" and "We’re Going to Eat You" plus the boatload of sound effects and dialogue from horror movies let the listener in on their imaginative, tongue in cheek outlook. The production appears to be a touch more evil and darker than their "A Dreadful Decease" debut, and Martin’s semi-talking/ semi-growling vocal employment matches the musical proceedings in an early Swedish death meets Autopsy fashion.

Zombie Inc. will not turn the death metal world upside down- they prefer to stick to the fundamentals and as a result establish an effective set of tracks that provides 39 minutes of entertainment. Probably preferable to those who discovered death metal in the early to mid-1990’s, "Homo Gusticus" is a decent slab of Euro death.