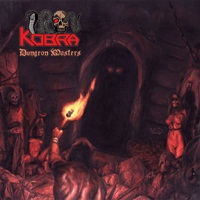 The moniker of this German band leaves little to the imagination regarding what you’ll expect when you press play. If you are expecting anything less than a classic form of traditional heavy metal from Iron Kobra, you need to examine your priorities. The quartet with cool stage names such as Sir Serpent, Ringo Snake, Don "The Warrior" Viper, and Lightning Lord Python align "Dungeon Masters" with their heroes: Manowar, Manilla Road, Brocas Helm, and others in that older, early epic metal territory.

Expect over the top narratives such as the "Intro" that spills phrases like ‘catacombs’ and ‘pure essence of power’ as the swords slice and dice you. "Dungeon Master" begins with a speed metal guitar trilling frenzy before slowing down into more conventional Running Wild meets Iron Maiden fare- Sir Serpent and Lightning Lord Python each sending their high action axe skills to the stratosphere. Ringo Snake’s drumming is very NWOBHM-influenced: nothing super fancy but very 4/ 4 oriented and propels anthems like "Valhalla Rock" and "Heavy Metal Generation" to Tank/ Tokyo Blade appeal.

"The Warrior" has a one of a kind voice: slightly warbling during the more wordy parts but then endearing in an early 80’s metal way when he screams out choruses such as the ones in "Metal Rebel" and the devil horns inducer "Druid’s Call". Many would put him in a similar category as Jorg from Sacred Steel, but I think he’s a lot clearer without the oddball birddog high screams.

Unvarnished and tight, Iron Kobra is machine-like in their attack and give it all they’ve got in the name of traditional metal. Prepare to bang thy head, cheer loudly and shout with gusto to this album.

RAVEN LORD – Descent To The Underworld