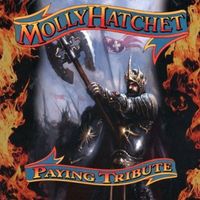 Southern rock band Molly Hatchet have always had a harder edge than most of the bands in their genre- so it shouldn’t be a shock to the system that on this mostly ‘cover’ album that they include a couple of hard rock classics in the mix. "The Boys Are Back In Town" from Thin Lizzy dazzles with the band’s guitar harmonies, and Mountain’s "Mississippi Queen" is right in vocalist Phil McCormack’s hearty, bluesy range.

Two Eagles tracks find their way into the mix, the softer sounds of "Desperado" and "Tequila Sunrise"- while the dangerous outlaw swagger comes in for George Thorogood’s "Bad to the Bone" and Rolling Stones "Tumbling Dice". Expect occasional arrangement extensions to allow the Bobby Ingram/ Dave Hlubek guitar duo a chance to throw down serious jam breaks- proving like fine wine their skills do not deteriorate as they mature.

Three live songs close out the 13 track effort- the expected "Flirtin with Disaster" and one of my favorites from their third album "Beating the Odds". Again, I wouldn’t expect the uninitiated consumer to pick up "Paying Tribute" as their first Molly Hatchet record- you would be better off with "Flirtin with Disaster" or the self-titled debut. This is a great look into where the roots of Molly Hatchet’s sound lie- and they can still get the job done in live arenas all across the globe.

Much like Eddie Trunk talked about recently on his radio show, even if all the original parts aren’t able to come together for a classic lineup due to members passing away or other outside circumstances, if you can assemble complementary players who can perform to the same standards, why shouldn’t acts like Molly Hatchet still keep moving along?