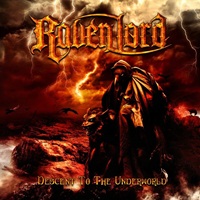 RAVEN LORD – Descent To The Underworld

Intertwining the best of neo-classical metal and classic heavy metal, Raven Lord burst onto the scene with an addictive 11 song debut album in "Descent to the Underworld". Vocalist Csaba Zvekan assembled a series of European musicians for recording purposes, and now has a touring act in place with guitarists Joe Stump and George Karafotis, keyboardist Alessandro Duo’, bassist Jamie Mallender, and drummer Rich Smith.

What matters most to my ears is the music- and overall this is a fine example of energetic metal with loads of 80’s influences. Aspects of Rising Force era Yngwie Malmsteen come up, along with Rainbow, Savatage, and Judas Priest- when taking in such potent arrangements as "The Rebel", "Let the Show Go On", and "World Out of Steel". Certain songs will be a shredder’s dream- especially in the lead break department with "Revelation" or the Firewind-like "Promised Land". Csaba’s range is fierce, delivering lyrics from a place well known to ardent fans of Sean Peck and Jon Oliva, advancing the story with an intense rivalry that mirrors the music at hand.

Occasionally the band veer into the clichéd norms- be it a call and response chorus that can get a touch too repetitive on "Metal Knights" or merely pushing the falsetto screaming and double bass tempo to its utmost extremity, but I think Raven Lord and its fans wouldn’t want things any other way. Mixing at Studio Fredman gives "Descent to the Underworld" that upper tier polish that rivals most of the band’s contemporaries in this field.

Entertaining for sure- we’ll have to see what the future holds with the new lineup in Raven Lord. The heavy metal, neo-classical realm needs one of those records that balances out the shred aspects with some exciting, individual songs- and I think "Descent to the Underworld" is filled to the brim with both.