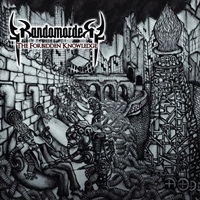 Tasmanian thrash metal- probably not three words you would figure would roll off the tongue quite so well, but the four-piece Randomorder live for the style on their debut album "The Forbidden Knowledge". Armed with a series of Australian gigs under their belt and a couple of demos in their four year career, this 9 song record focuses on a speedy brand of metal, complete with equally vicious word spew and the necessary harmonic elements to keep the hooks flowing in the guitar department.

Guitarist Gabe Latham has a low, forceful voice – a cleaner Ron Eriksen (Viking) or at times Max Calavera-like without the Brazilian accent which gives songs such as "Desecration Is Your Name" or the title cut an angry vibe. The guitar riffing and drumming from Latham, fellow axe man Sean Kelleher and Matt Bicket has this old school thrash platform, but crossing the lines of the second movement when acts like Vio-lence, Viking, and Demolition Hammer took over the underground. Stop on a dime riff changes, moments where the syncopation reaches a fever pitch, and at other times the little trailing squeals or triplets signal the next pit worthy segment to pay attention to.

Favorites include the 6:50 "Exiled" with a couple of key Forbidden-esque twists and turns (along with some killer double bass work from Matt) and the stair step riffing that mirrors the combat lyrics for "Caught in the Crossfire". The band wisely chose renowned Australian producer Joe Haley (Psycroptic) to handle this recording, giving Randomorder the right, balanced sound necessary to keep the listeners on the edge.

Not everything is original ("Salvation" takes a liberal borrowing of the vocal pattern from Kreator’s "Terrible Certainty" during the verses), but overall Randomorder gets the blood flowing, and that’s more than half the battle in appealing to thrash maniacs.