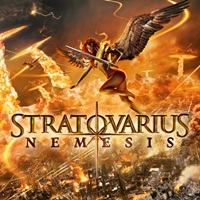 When a key member leaves the fold of a metal band, panic sets in. Especially in the case of a power metal institution like Finland’s Stratovarius when that member is your leader, main songwriter, and focal point of highlights and lowlights like guitarist Timo Tolkki. Yet since 2008 keyboardist Jens Johansson and vocalist Timo Kotipelto have soldiered on, even with drummer Jorg Michael stepping away following the final tour in support of 2011’s "Elysium" release. "Nemesis" is the fourteenth studio platter for the band, and first with newly acquired drummer Rolf Pilve (Code For Silence, Solution .45)- reliably pushing forward with one ear firmly in the camp of delivering what the audience desires while also taking a chance to streamline certain songs for wider appeal.

"Fantasy" for instance just has the addictive mid-tempo riff with Jens sprinkling in keyboard parts while Timo’s melody lines in the verses and chorus are more in his middle range- something I can hear the audience responding to well in a live situation. Typical power numbers such as "Abandon" and "Out of the Fog" prove Rolf has the drum chops to keep Stratovarius sharp, while Jens and guitarist Matias Kupiainen alternate with their lead work and join up for neo-classical duals fans of the genre live for. The modern elements come in subtly: a bluesy lead break during the simpler, groove-oriented "Castles in the Air" where bassist Lauri Porra even gains some spotlight moments or the slower, mechanized movements in the outer world effort "One Must Fall".

Stratovarius 2013 doesn’t feel the need to bury their past roots- they confidently stride with an intuitive sensibility, keeping their songwriting on a creative high by exploring slower to mid-tempo dynamics. If you’ve enjoyed their output post-Tolkki, "Nemesis" will not disappoint. Who says European power metal will die? I feel that the band are learning tricks of the dynamic trade from a younger band such as Epica and incorporating the atmosphere and grandeur to make for another high impact outing.