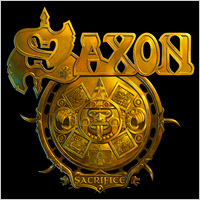 Many NWOBHM acts rest on the laurels of their early accomplishments. Nostalgia only gets you so far in the metal business, especially since the old touring model rears its head again to keep bands alive- and new product seems to be an afterthought in terms of sustaining a living. Saxon never subscribed to this philosophy. In good times (releasing a boatload of material in the early 80’s) and bad (the subsequent late 80’s when chasing the North American audience heydays), this UK act always felt the need to churn out new studio material. "Sacrifice" is their 20th studio album and shows no sign of losing any metal impact for a band whose main members (Biff Byford-vocals, Paul Quinn-guitars, and Nigel Glocker- drums) are all in their early 60’s, along with relative youngsters Doug Scarratt on guitars and Nibbs Carter on bass.

These 10 tracks appear to have a higher energy outlook that infuse some of their more metallic offerings like "Metalhead" and "Into the Labyrinth" as opposed to 2011’s hard rocking "A Call To Arms". "Warriors of the Road" and the title track reverberate with rancor, the riffs charging out of the gate, the lead breaks worthy of any air guitar output as Biff’s melodies consistently get even the most critical fan out of his chair. "Made in Belfast" features some Celtic /acoustic guitar work throughout while "Guardians of the Tomb" has a mid-tempo marching/ crunch riff that navigates beautifully against slower double bass work from Nigel- the instrumental section worthy of what Iron Maiden should be doing in their advanced years and not the boring progressive rock-like arrangements they have spit out over the last few studio offerings.

No tedious filler to be found. Master craftsmen when it comes to the traditional metal genre, Saxon has always been one of those bands who keep up with modern production and technology without forsaking the main tools that make them special: real instrumentation and creative construction. Current favorites: "Stand Up and Fight" with its domestic cultural guitar lines, slower Accept-ish "Walking the Steel" and the sinister title cut.

While other bands plan for retirement, my sense is Saxon has another 8-10 years ahead of them- and we’ll all be the better for it.

BLOCKHEADS – This World is Dead