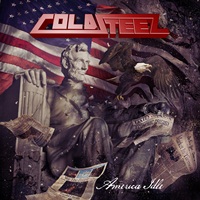 Sometimes we wonder why bands fade into oblivion. Circumstances dictate that you need to earn a living to pay the bills, especially when you get married and have children- so priorities change. Fortunate for many in the underground, the fire within to be creative can still exist- and as a result we’ve seen a series of reunions keeping metal alive and thriving. Vocalist Troy Norr never lost his affinity for metal following Coldsteel’s original demise after their "Freakboy" album release in the early 1990’s- he has spent years fronting a King Diamond tribute band THEM, and after a re-issue of their "Freakboy" album and a Demo Anthology CD decided the time is ripe for more original music.

"America Idle" as a 5 song EP continues their melodic thrash platform, benefiting from years of maturity and natural seasoning in terms of capturing the right tones and production values. The title track opens with a series of news/ political sound-bites as if the consumer is shifting his radio or television dial before moving into a series of killer mid-tempo riffs and a punishing tempo groove while Troy delivers the lyrics in a sinister, lower register sneer with added upper pitch note holding for chilling emphasis. The trademark gang vocals and more straightforward punch to the follow up "Blood Secrets" should remind many of what made New York thrash so special- the bass work from Doug Odell very fluid as the solos from guitarists Joe Shavel and Eddie Campbell burn with arpeggio skills and should exhort many cheers for those into axe mastery.

"You Lose!" comes the closest to reminding me of their early 90’s direction, a lot of the riffing fusing Anthrax and Exodus, along with some killer stair step tempo dynamics from drummer Hal Aponte around the 2:06-2:16 mark. If you are going to make a return, to me it is best to go big or don’t even bother at all- and I feel with the cover art, professional production skills, and performances Coldsteel hit a home run with "America Idle". European audiences will eat this up- but I can see multiple generations in North America also taking to this material.

People into Testament, Anthrax, and the like- this EP is a mandatory purchase.