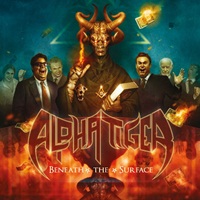 ALPHA TIGER – Beneath The Surface

When it comes to speed metal with traditional and NWOBHM influences, all eyes seem to point to Europe these days for the next big thing. Which shouldn’t be shocking: when North American radio stations and MTV shifted to grunge/ alternative sounds after the major media proclaimed metal’s demise in the early 1990’s, other parts of the world continued to churn out new records and albums, trends be damned. Hailing from Saxony/ Germany, Alpha Tiger on their second album "Beneath the Surface" push all the right buttons for reviving the glory days of high pitched vocals, blitzkrieg speed riffs, dual guitar parts, a thunderous rhythm section and a sense of leaving all your troubles behind in the name of METAL!

Stephen Dietrich continues his fine upper echelon power range in the vocal department through a variety of material: some of his best work on the mid-tempo, harmony driven "Waiting for a Sign" and the early Queensryche meets Heir Apparent-like "Eden Lies in Ruins". He has the emotional projection and vibrato of John Arch, along with the lung capacity of Michael Kiske. Musically the band love epic arrangements full of longer instrumental sections, taking the best of Riot, Judas Priest, and Sanctuary in mind for "Crescent Moon" but also just rearing back the throttle and going gung ho on faster rhythms and tempos from time to time such as the opener "The Alliance" that could remind many of early 80’s speed metal with NWOBHM influences.

I also enjoy the extra spices that make certain songs engage with you in a fist pumping, scream and shout manner: almost like the days you would want to burst out ‘M-Z-A’ from Loudness or break out your best flying V air guitar workouts or simulated drumming with the best metal face contortions. "From Outer Space" and "We Came from the Gutter" seem to be my two current favorites for these types of spontaneous reactions as the songs flood my headspace.

An excellent pick up for the label, Alpha Tiger offers a different side to the genre than Sweden’s Wolf, and should gain broad appeal if placed on the right touring bills and festival opportunities. They took the best elements of 2011’s "Man or Machine", improved in the right areas for versatility and sonic benefit, and this could be a benchmark along with Enforcer for the traditional/ speed metal genre.