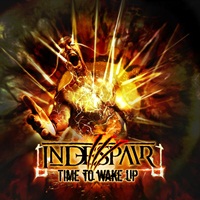 INDESPAIR – Time To Wake Up

Certain countries conjure up specific mental images when it comes to metal styles. Greece and Germany for instance have always had a long standing appreciation for traditional and power metal styles, while the 80’s in North America seemed to be a hotbed for thrash. Poland has had a number of extreme death and black metal outfits make their presence felt on a worldwide scale: Behemoth and Vader two of the veterans in this movement. So it’s very refreshing to hear a quintet whose sound is more an amalgamation of tight power harmonies and slightly heavier thrash movements, along with a vocalist that keeps his register in palatable, melodic singing range- that’s what you’ll get with InDespair on this debut album "Time to Wake Up".

The guitar twists and main riffs on songs like "Destined to Fall" and "Vexila Regis Prodeuni Inferni" possess this schooled nature, a skill set of knowing when to build off of a main part with subtle nuances (a lead part there, maybe a slight change in tempo) to keep your ears engaged. Vocally Piotr Krawczyk has a clean nature to his melodies but can be rough and raw when approaching some of the screams and growls- which would probably put him closer to a thrash singer than anything of the Dickinson/ Halford/ Dio caliber. I loved the war-march rhythms within "Tonight We Die Free" which allows for some restrained lead breaks in a Gary Moore/ Michael Schenker mold and "The Scent of Fear" contains a bevy of head banging moments that would certainly incite audiences while InDespair perform live.

"Time to Wake Up" would fit in with those who like the mid-tempo material from Iced Earth plus the older Vicious Rumors catalog- along with a vocal platform more in tune with the German thrash brigade. This could be one of those hidden gems people talk about down the road.

CELTACHOR – Nine Waves from the Shore

ALPHA TIGER – Beneath The Surface