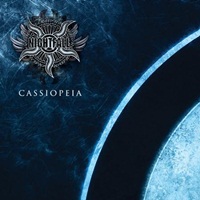 Do you ever struggle to capture a true essence of an art form when it just elevates your mind into fields never imagined? Be it a dramatic play, a bold cinema experience, breathtaking pictures or a piece of music- there seem to be times where you know something stirs passion, chills, and excitement- yet leaves you as a loss for proper words. That’s the current dilemma facing me every time my speakers resonate with Greek metal band Nightfall- now on studio album nine "Cassiopeia". Combining gothic, doom, death, and black metal styles probably has a lot to do with it- as these 11 tracks wrench out every aggressive and contemplative feeling into something majestic, magical, and intense all the same.

Lineup shuffles for the sextet have been prevalent over the past 3 years: the latest acquisitions in 2011 include bassist Stathis Ridis and second guitarist Constantine (Mystic Prophecy), but it doesn’t stop the creative juices for overflowing. Fading in a dual doom-laden guitar intro, "Phaethon" roars as if atmospherically rumbling from a mountain top- some of the burning hot leads reminding me of Dutch melodic power metal act Elegy in their heyday, delivered against a semi-blast beat backdrop. They confidently stride from a trilling guitar to a straightforward power riff before an extreme metal twist- while keyboards dance and volley to add another gothic/ symphonic dark flavor on "Oberon & Titania".

"Stellar Parallax" recalls the greatness of Sweden’s Cemetary (both death and gothic eras), while "Hyperion" takes on an exotic sheen, tribal in its early moments while turning into something slightly progressive at the core. The vocals of Efthimis Karadimas are low and growling but audible, important as to add another solid element to Nightfall’s winning metal formula. Drummer Jorg Uken deserves honorable mention for his potent chops and killer feel for metal and its nuances: some of the best passages taking place on the final two numbers "The Sand Reckoner" and "Astropolis" as he has to merge speed fluctuation without derailing timing and tempos.

Along with Septic Flesh this act is one of the reasons Greek metal is worthy of plugging into. "Cassiopeia" has multi-cultural and genre appeal- and still keeps me mesmerized today.