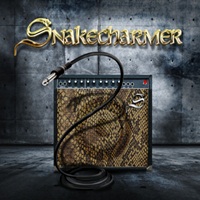 Six highly esteemed musicians from the UK scene get together to form a bluesy rock act with decidedly strong 70’s influences and modern production technology to allow Snakecharmer to shine. Guitarist Micky Moody and bassist Neil Murray are most known for their early Whitesnake work, drummer Harry James a mainstay with Thunder, keyboardist Adam Wakeman famous in Ozzy Osbourne, while guitarist Laurie Wisefield gained acclaim with Wishbone Ash and vocalist Chris Ousey best known in Heartland. So it shouldn’t be shocking that this self-titled, 11 song effort has a lot in common with Bad Company, Whitesnake, Gary Moore, Lynyrd Skynyrd and others in that breed.

Chris’ range has that southern rock meets classic blues at heart- Paul Rodgers, Brian Howe, and David Coverdale come into focus when I take in a power ballad like "Falling Leaves" or the slithering swagger of opener "My Angel". Micky and Laurie are a devastating duo on guitar, filling in all the spaces be it acoustic or electric, clean or with pumping distortion- "A Little Rock and Roll" and the mid-tempo anthem "Stand Up" offering contrasts in feel but unleashing killer memorability in the riffing and interplay. Adam tickles the ivories with a bevy of tones and instruments at his disposal- "Smoking Gun" one example of layering 3-4 different keyboard feels from Moog synthesizer to 70’s symphonic/ Styx-like measures that add a playful element to this bluesy groove number.

Snakecharmer will not reinvent the classic bluesy hard rock genre with this release. That’s not their intention. Playing to ones strengths is a good thing in this business- as I know there are enough people into twin guitar harmonies and mid-tempo or slower hard rock anthems with killer melodies and knowledgeable skill to gain a modest following. Glad to see the veterans pump out original material in 2013- and I look forward to future outings from the sextet.

CELTACHOR – Nine Waves from the Shore