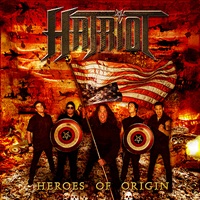 When you gain acclaim as one of the most memorable thrash vocalists from the Bay Area scene due to your work with Legacy (the pre-cursor to Testament) and then Exodus ("Fabulous Disaster" his discography pinnacle), where do you go in 2013 if you want to make another run? If you are Steve ‘Zetro’ Sousa, you join forces with your two sons- bassist Cody Souza and drummer Nick Souza, find two young guitarists with chops in Kosta ‘V’ and Miguel Esparza and out pops a whirling sound of intensity, keeping the primal aspects of the genre in mind for this debut album "Heroes of Origin".

With song titles like "Murder American Style", "Globacidal", and "Mechanics of Annihilation", Zetro hasn’t lost any of his biting tenacity towards speaking from the heart about violence, death, and the injustice that plagues our world. His voice still resonates with that lurking venom of a serial killer ready to strike at any moment- some of his best work on opener "Suicide Run" and the double bass ripper "The Violent Times of My Dark Passenger". Kosta and Miguel aim to please with their fluid, melodic lead play with occasional variance into the shred waters- "Blood Stained Wings" and the 6 minute plus crunch-fest "Shadows of the Buried" are two of the best examples of their obvious proficiency at thrash soloing.

Gang vocals in all the right places, speedy verse vocal parts during the final title track, vibrant production, and a food for thought cover portrait (planes, stars, skulls and an upside down version of the American flag) means Hatriot aren’t attempting another retro-thrash revival. They live for the old school Exodus sound, and for those who want a logical extension of that "Fabulous Disaster" meets "Impact Is Immient" era in shorter, more streamlined arrangements, Hatriot is your act to follow.

Second revival, third revival: who cares? Thrash is alive and kicking, and "Heroes of Origin" lives up to its bruising, battering promise from first note to last.