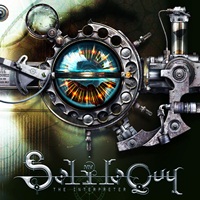 Certain acts strike an immediate chord with the listener. When it comes to progressive metal/ rock, the oddball factor with the time changes and multiple layers of vocal melodies gives this UK band My Soliloquy instant appeal to my sensibilities. Starting in 2002 with vocalist/guitarist Pete Morten, the quintet has self-released numerous recordings before this debut 8 song album hits the streets.

Where does the quirkiness come from? You hear it with the hypnotic electronic drum beat weaving around narrative background sound effects and a keyboard refrain that would serve as perfect fodder in a dark detective drama- all within minute one of "Inner Circles" before the song mutates into circus-like/ Jethro Tull themes and electric progressive rock tapestry that would make Yes and Pain Of Salvation fans cheer. Or the merging of warning signals that fuels opener "Ascension Pending"- the main chords almost tapping out a Morse Code pattern while drummer Damon Roots incorporates Stewart Copland accents with his snare/ cymbal tricks and turns beyond the metal norm. My Soliloquy is another British band who may not necessarily blaze with technical prowess- their skill set is more on wider range of dynamics and creating tension with buildups and transitions, so that with every listen you can pick out something fresh to hang your hat on.

Pete as a vocalist has an eclectic range: on one hand rich with Lance King/ Geoff Tate power for hitting all the right notes, but on the other hand throwing in that System Of A Down/ Jane’s Addiction wild card factor. Check out his work on "Flash Point" or the creepy "Six Seconds Grace" to understand the Dr. Jeckyl and Mr. Hyde layers of mystique and mastery. Appearances in fictional novels and movie soundtracks prove My Soliloquy is ready to take on the world on their terms- and as a result will gain their own following.

"The Interpreter" may sneak up on many end of the year favorite lists. Clever, intriguing, exciting- and a band I’ll be paying much attention to as the sky’s the limit for their potential.