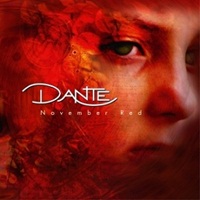 Founded in 2006, German progressive metal act Dante is a five-piece band that straddles the lines of modern metal and progressive rock. "November Red" is their third album, a 7 track record with a playing time of 61 minutes. In fact three of the song hit the 10 minute plus mark- so prepare for longer arrangements and prolonged instrumental passages that often build through dynamic tension or stair step nuance enhancement.

The ballad "Beautifully Broken" contains female operatic vocal accompaniment while the main melodies from Alexander Gohs float between somber gothic textures and the restraint of Tom Englund of Evergrey. The follow up "The Day That Bled" opens with point/ counterpoint riffing from keyboardist Markus Maichel and guitarist Markus A. Bader, slowly evolving into this almost progressive rock meets latter day Savatage arrangement- Alexander taking center stage with his provocative, Zak Stevens-like way with words. Dante will not be mistaken for being the wildest virtuosos to come down the pike- their sensibility and focus on the details keeps your ears engaged: be it quieter, classical-oriented piano play that flows directly into a staccato-oriented, off time passage for "Shores of Time" or the church-like feel with the bass/ organ and ringing guitar for the closing title cut, you can tell that Dante is not cut from a Dream Theater or Symphony X template.

Try as I might, "November Red" has not sunk deep within my soul as an album I can fully recommend. Sure there are hooks, outstanding musicianship, and plenty of dynamics- but it doesn’t stand out to me like other German bands from the past like Sieges Even or Superior. Dante appears to be a group better enjoyed with a full on light show and dazzling backdrops on live stages for my tastes.